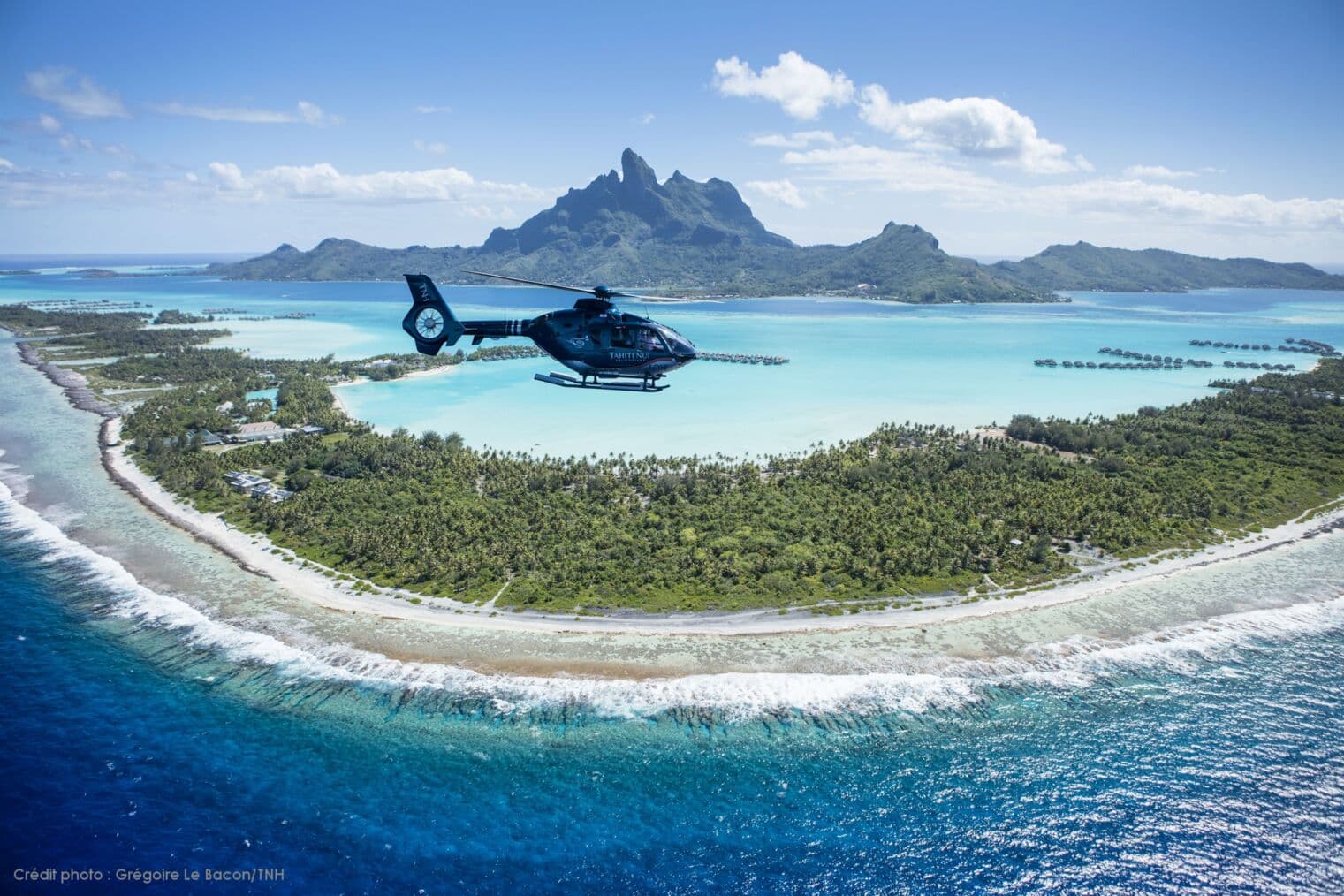 Helicopter Tour in Bora Bora, come & fly with me!

Things to do in Bora Bora

For good reason, Bora Bora is the most visited island in French Polynesia. It offers everything from crystal clear water to beautiful sandy beaches to stunning vistas of Mount Otemanu, yet seeing it from the ground is difficult. There is no better way to obtain a bird's eye perspective of all this splendor than to take a helicopter flight!

We've had countless opportunities to join our clients on helicopter trips during the last five years. If you're curious about what a scenic helicopter tour in Bora Bora is like, here's a story about ours.

In French Polynesia, Tahiti Nui Helicopters is the only company that offers helicopter excursions.  In Bora Bora 3 types of tours are offered:

This is a 10-minute tour of Bora Bora's lagoon. The helicopter will keep to the island's east and south, where the blues are stunning. The resort and its overwater bungalows may be seen from above. In my opinion, 10 minutes is too short and may be frustrating.

This trip is similar to the Pacific Pearl Visit, except that you will tour the entire island and remain above for 20 minutes. This is the tour I would choose between the two.

This tour is, admittedly, my favorite. Because it allows you to discover another island, or to be more precise, another atoll of the society’s islands, in addition to enjoying the beauty of Bora Bora from the sky… and what an atoll! Tupai is perhaps one of the most photographed due to its heart shape. I'll go through everything in more detail later. Tupai will only be visible from the sky if you book the Heath of Tupai trip. No stop will be made on the atoll itself.

This Tahiti Nui helicopters excursion will take you above Bora Bora and Tupai, and you will have the chance to step foot on the atoll! You’ll have 40 minutes to explore the surroundings. Only private tours are available.

It is also possible to book a helicopter for transfers between islands (of the society) as well as between resorts.

Discover Tupai via a helicopter tour: A once-in-a-lifetime experience.

Tupai is a 7-square-kilometer atoll located 19 kilometers north of Bora Bora, the town to which it is attached. The atoll is unoccupied and has no construction, though hotel projects are frequently discussed. Tupai is best known for its shape from the sky: when observed from above, the atoll forms a heart, how romantic!

It is a natural sanctuary with rich underwater wildlife and millions of birds. When the season arrives, the sea turtles come to lay their eggs, in peace.

Tupai is the ideal place for a romantic getaway with your loved one. It is also an ideal location for a dazzling proposal. What could be more romantic than an island shaped like a heart? We had the opportunity to photograph several proposals in Tupai, and guess what? They all said yes 😉

Tupai's gateway allows you to fly over the island and land for a few moments.

The meeting with Tahiti Nui Helicopters is held 15 minutes before takeoff so the crew can show you the safety video.

The take-off is from Pago (on the main island), but pick-up can also be arranged at hotels with helipads (Four Seasons, St Régis, Thalasso, and even the Conrad with its surprising floating helipad!).

The helicopter can carry up to six passengers: five in the back and one in the front next to the pilot.

A headset allows all passengers to communicate with one another. It should be noted that the cabin is not air-conditioned, so it can get very hot, very quick in the cockpit.

The flight to Tupai's outskirts takes about 10 minutes. During the whale season, whales can be seen from the helicopter as they frequently pass between Bora Bora and Tupai.

The island's heart shape is mostly visible from the side. The pilot will turn around the island for a few moments so everyone can appreciate this unique shape.

Then there's the landing. We feel alone in the world after the helicopter lands on an immaculate white sand beach. There is nothing on the atoll, perfect if you want to trigger your inner Robinson Crusoe.

Depending on your package, more or less time is allocated on-site. A snack and, of course, a glass of champagne is also available.

It's also a great location for a photo shoot. The immaculate sand, the various shades of blue... a very pure setting for beautiful photographs.

After a few moments, back to Bora Bora! I advise you to sit in the front seat to enjoy the most beautiful view when arriving on Bora Bora.

The pilot then makes several turns around the Otemanu mount, above the lagoon, its shades of blue, and the overwater bungalows.

I say it all the time, but Bora Bora is truly breathtaking from the air. There is nothing to do but enjoy this incredible beauty…

Helicopter tours in Bora Bora: Is it worth the money?

As I mentioned in my article on parasailing, seeing Bora Bora from the sky is something everyone should do at least once in their lives. Often referred to as "the most beautiful island in the world," it takes on new meaning when seen from above, seated in the middle of the Pacific's deep blue.

If your budget allows it, I recommend that you book a helicopter tour.

For those on a tight budget, consider sharing the tour with other people or couples to reduce the cost of the activity. Please do not hesitate to leave a message in the Facebook group! It is likely that other couples will travel to Bora Bora on the same dates as you to share a tour and save money.

Another, less expensive option for admiring Bora Bora from the sky is to go parasailing (which I've covered here) and sit on the right side of the plane during the takeoff and/or landing on the island.

Things to know before booking your helicopter tour in Bora Bora

A helicopter flight, like parasailing, is completely dependent on the weather. If the weather is hazardous, or the meteorology prevents you from seeing clearly from the sky, your tour will be canceled and/or rescheduled... And, because the weather in Bora Bora is completely unpredictable and changing, this is often announced on the same day.

Because vibrations during helicopter flights can be dangerous, pregnant women are not permitted to fly unless they have a medical certificate stating that they are safe to do so. If a pregnant woman does not notify the company prior to boarding, the company will not be held liable.

After scuba diving, never book a helicopter flight (or any flight).

When you dive with a tank, the pressurized air causes harmless gas bubbles to form in your body. These bubbles will go away over time. These small bubbles will disappear on their own and will not harm you… unless you fly. People who have been scuba diving within the last 24 hours are not permitted on board to avoid a decompression accident. 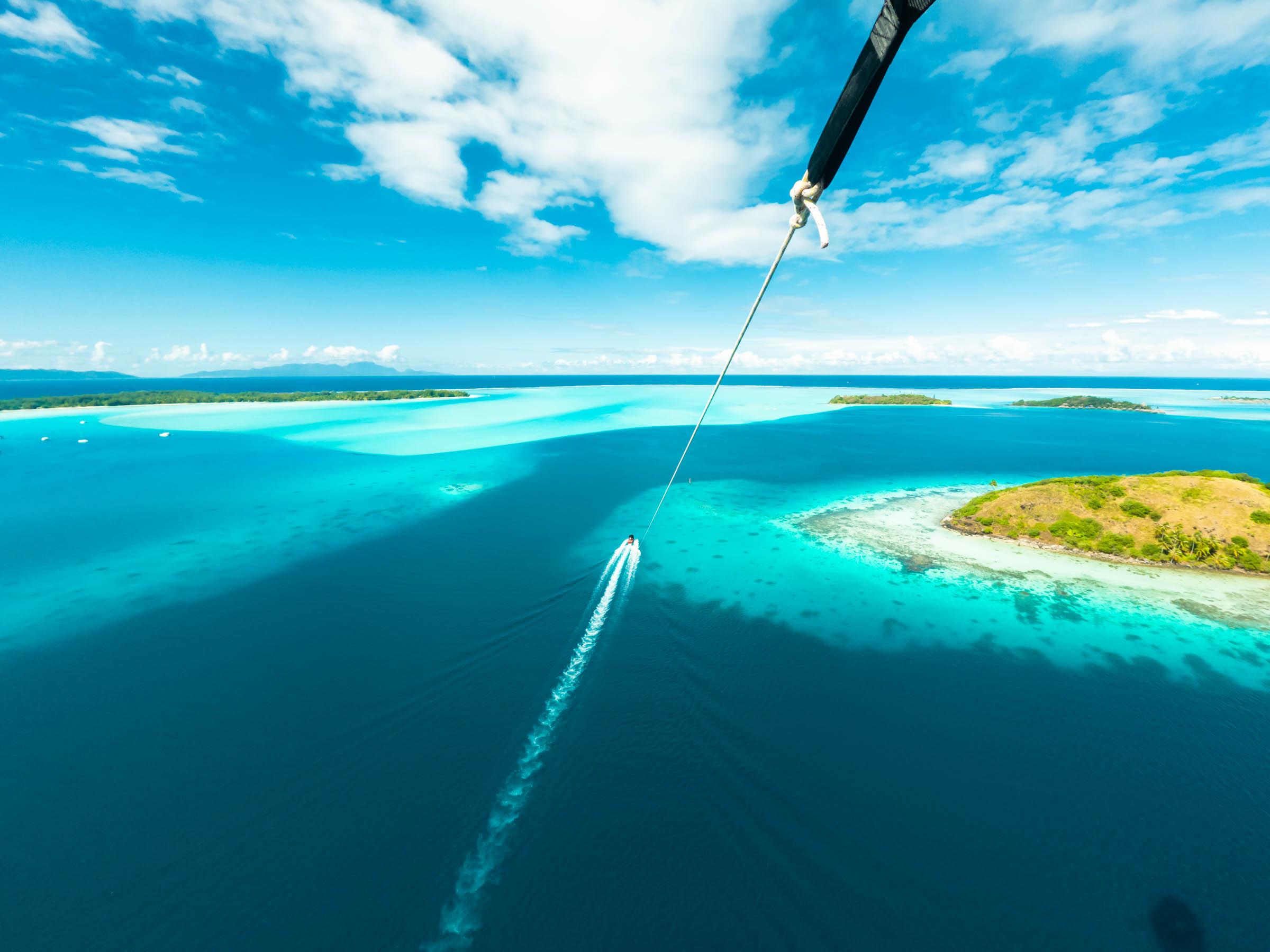 I tried for you: Parasailing in Bora Bora 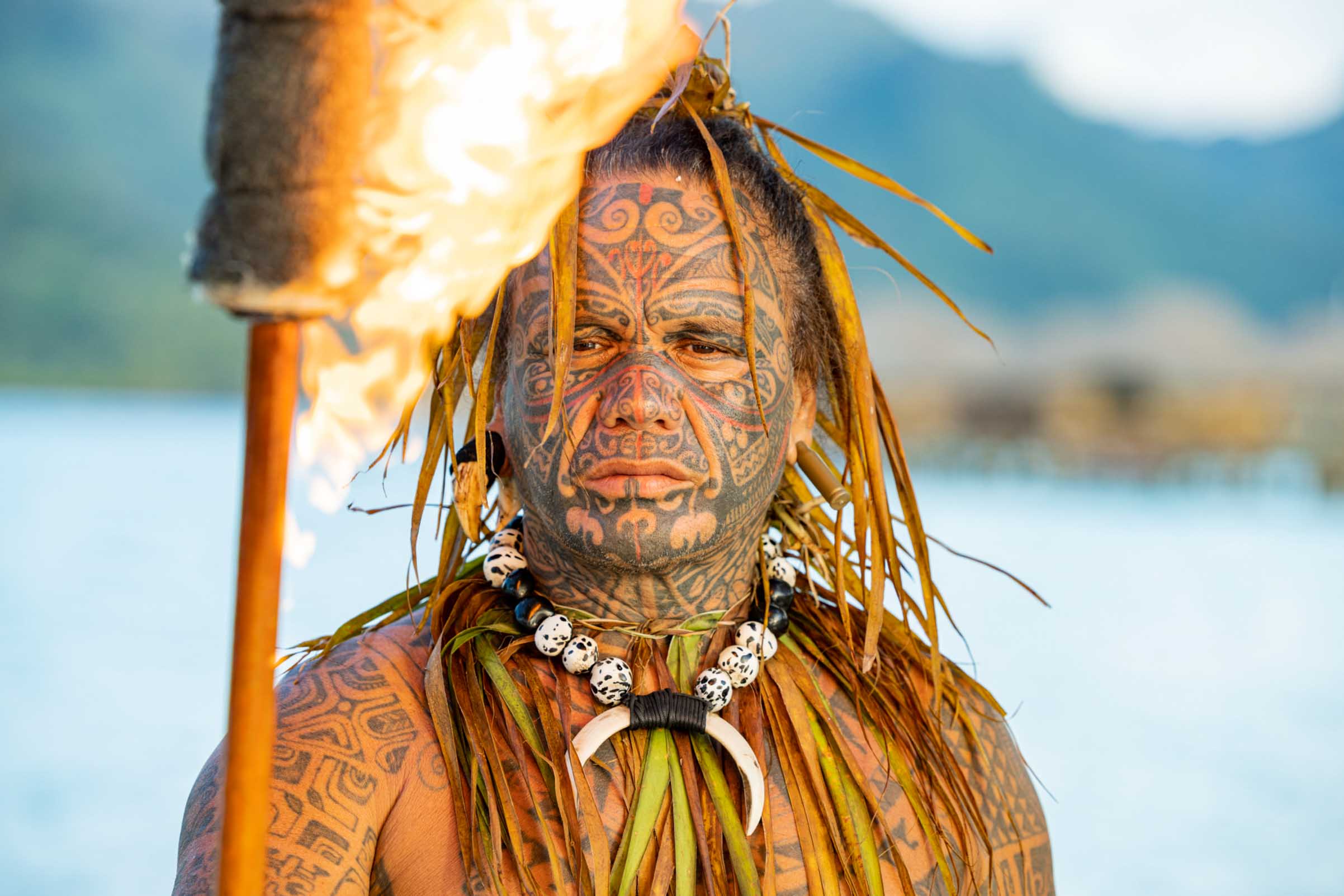 Tahitian tattoos: Everything you need to know before getting one