Tahitian tattoos: Everything you need to know before getting one

Did you know the Tahitian tattoos were one of the first ones out there? Whether you’re a tattoo addict or a tattoo newbie, Polynesia should THE place to get your next ink on. It’s the birth home of tattoos! And if you need a bit of inspo, or help to get the symbols right, this article is for you.

We share bits of history, deeper meanings, and dive into the tradition of tattooing in Polynesia (yes, mainly Tahiti). Ready? Get cozy & comfy and read on.

What does ‘tattoo’ mean in Tahitian?

The word tattoo comes from the Tahitian ‘tatau’ and goes back as far as 1500 BC. It means to ‘tap lightly’ and tries to interpret the sound of tattooing ‘tat-tat’ into a word.

Traditionally, even the tattooing tool (the wannabe needle made from a shark’s tooth) was called ‘tatatau’. So, if you get one in Tahiti, tell your friends you got the original ‘tatau made with tatatau’.

But how did this word spread and become so famous?

It was all James Cook. This famous world explorer brought the word ‘tattoo’ into Europe (he called it ‘tataw’) after his first voyage in 1771. He returned from Tahiti and New Zealand and brought a Tahitian Ma’i with the most epic tattoos of the time and voila, the tattoo art became popular worldwide.

However, the tattoos in Polynesia were MUCH more than just a body decoration. They were also a language, a symbol of power, and a mark of honor.

What makes a Tahitian tattoo so unique?

Here’s everything that makes them special…

The art of tattooing is an ancient & long tradition in Tahiti

The Polynesian tattoo goes way back over 2000 years ago. It all started with tapping ink on people’s skin to represent their social status, likes, values, origin, and beliefs. The more complicated the tattoo, the more powerful & committed you seemed to the tribe.

They were made with shark’s teeth

Since there weren’t any tattoo machines yet, it was more the ‘stick& poke’ style. Yet instead of a basic needle, they used a ‘comb’ consisting of anywhere from 3-20 needles made from a bone, or shark’s teeth.

This tool, ‘the tatatau’, was tapped with a second wooden stick to insert the pigment into the skin. It required two people to do this process - one to do the tattoos and the other one to stretch and hold the skin.

While this all sounds ~oh so cool~ , it wasn’t very healthy. This form of tattooing used to cause a lot of infections and took sometimes even a year to heal. If you got tattooed, you needed to make sure you had someone to take care of you during this time.

But don't worry: only a few artists still use this method today, and often only for shows and/or demonstrations. The vast majority of tattoo artists use the a classic machine.

The Polynesian tattoo art was nearly killed but it revived

As we already mentioned, Polynesian tattoos have a long history. But when the Christian missionaries arrived in Polynesia in the 18th century, this art form almost disappeared! According to the old testament, having a tattoo was a sinful glorification of the skin so it became strictly forbidden.

It was only in the 1980s that the Polynesian tattoo got its renaissance and it became a highly respected art form again. Nowadays, travelers from all over the world come to Polynesia for the true original tattoo.

Good to know: While it’s easy to find Polynesian tattoo artists in Tahiti, there are only a few left from the ones who still practice the authentic traditional style of tattooing. Make sure to ask around for recommendations if you’re interested.

The Tahitian tattoos are a blend of Polynesian & Western art

Since Polynesia is huge a collection of many islands, there are 5 main styles of Polynesian tattoos: Maori, Samoan, Marquesan, Hawaiian, and Tahitian. All of these have specific traditional features but the Tahitian one developed a bit later.

You’ll notice the Tahitian tattoos incorporating elements of all the other ones plus some western art elements.

Tahitian tattoo is characteristic of smooth, rounded, and naturalistic elements and figures. It’s more decorative than the others and oftentimes creates that ‘wow’ factor making it the most popular one.

Tahitian tattoo: the message behind this ancient art of tattooing

The Tahitian tattoo in its ancient form was much more than just a body ornament. Mainly, it was a way for individuals to differentiate themselves from others. The tattoos would show everything from their social status, wealth, health, the island they come from, values, and the ability to endure pain.

They were also a sign of courage and power since the traditional way of tattooing was extremely painful, and sometimes even deadly.

Usually, you’d find warriors, chiefs, kings, and princes having more complicated & detailed tattoos. For women, tattooing represented sexual maturity and they would focus their tattoos more on their arms and hands area.

Polynesians even had ‘tatau’ ceremonies that lasted from several days to several weeks as a celebration of a completed challenge. The ones that wouldn’t go through this challenge risked not being accepted by society, being labeled as cowards, or being hated by the rest of the tribe.

On the other hand, the tattoo scars would forever represent their endurance and dedication to the cultural traditions of the tribe.

Can you get a tattoo in Tahiti?

Is it safe nowadays?

A century ago, getting an infection was a common problem due to the methods used. But today, this process is much more advanced and every tattoo artist works in sterile conditions. The very rare infections that happen can get easily treated with antibiotics.

However, just like with regular tattoos, if you follow the post-tattooing safety precautions and take care of them, you should be okay. :)

A deep dive into Tahitian tattoo designs: the hidden meaning of each symbol

If you’d like to try out a Polynesian tattoo using one of the traditional Polynesian symbols, here are a few examples along with their more profound meanings.

Enata as a word stands for relatives represented in the tattoo. It can be a man, a woman, or oftentimes even a divine figure. If the people are turned upside down in a Polynesian tattoo they showcase the defeated enemies.

If you see a row of triangles as a design in Polynesian tattoos, these are meant to be the super sharp shark’s teeth. This symbol represents bravery, heroism, leadership, and vitality in life.

A spearhead is believed to help you embrace the warrior within you. When used with Polynesian tattoos, it symbolizes victory in a battle, protection, and endurance. Spearheads also represent sharp items or even an animal sting. It used to be a popular symbol in the tribe’s warrior class.

You’ll usually see waves as the representation of the ocean. The Polynesians see the ocean as a link between the visible and invisible worlds, the flow of life and death, or even as their second home and a peaceful place of rest in the afterlife.

However, it can also be seen as life, a constant change, and flowing through life.

The Tikis come mainly from the Marquesan style of Polynesian tattoos. They represent the human ancestors who after passing became semi-gods (half human & half god). The legend has it the Tikis used to appear to men as lizards and sometimes even other animals and served as their guardians.

Having Tikis as a tattoo conveys strengths, masculinity, lucky charm, and fertility, and is believed to protect you from dangers and evil spirits.

A turtle is one of the most significant creatures in the traditional Polynesian culture, and also one of the most popular designs. In life, Polynesians associate it with virality, endurance, health, and strength.

It also embodies the ideas of a tribe, family unity, or stitching families back together.

Another super popular Polynesian tattoo design that everyone loves! However, lizards aren’t just cute symbols, they’re also believed to protect people from evil, and help them communicate with gods. They bring good luck, access to the spiritual world, and even have the power to kill the ones who are disrespectful.

According to the Polynesian culture beliefs, gods (atua) would often appear to men in the form of lizards to mankind.

You know the way the stingray hides from sharks in the underwater sands, covers up and can stay still for hours… This shows that Stingrays are amazing at protecting and defending themselves! And so, Polynesians believe that having them as a tattoo can help keep us protected as well and they’ll share their superpowers with us.

The dolphin as a tattoo embodies the qualities of freedom, guidance, and protection. According to Polynesian mythology, the dolphin guided the Maori to the promised land and protected them from sharks.

If you feel like you’re living with a lot of fear, and could use some peace of mind, and feeling safe, the dolphin might be a great tattoo for you. And pretty body decor too, let’s be honest! ;)

For more explanations of the symbols, you can check Tattoo Tribes

Not sure where to place it? Here’s how the locals decide

Of course, you can put your tattoos wherever you feel like. But Polynesians also believe that every part of the body has a different energy and connection to the spiritual world.

Polynesian mythology says that humans are children of Rangi (Heaven) and Papa (Earth). These two were once united but they’re not anymore and the human body is the link between the two. Therefore the upper body is our connection to the spiritual world and heaven and the lower body relates to the world & earth.

Here’s what each body part relates to:

The head is our closest contact point to Rangi. This body part encompasses themes like spirituality, knowledge, and intuition.

The trunk as a whole (the body’s middle part) represents courage, independence, and sexuality. The stomach is the root of mana (the life force) and is the center of our independence.

In Polynesian culture, the upper arms and shoulders associate with strength and bravery. Because of this, you’d find many ancient warriors and soldiers having their shoulders tattooed.

Hands are the makers, the body parts we use to turn our creative ideas into reality. For this reason, Polynesians love to think of them as our creativity-related areas.

You know the phrase ‘baby steps’ to achieve a big transformation… Well, Polynesians have it a similar way! They see legs and feet as a representation of moving forward, transformation, progress, and choice. They also connect us with Papa - the Earth and are a bridge to the material world.

We all have our feminine & masculine energies mixed in our bodies. Yet, In Polynesia, people also believe they can be more focused on one side than the other. The left side is considered to be more feminine and the right side more masculine.

Is it disrespectful to get a Polynesian tattoo?

Some Polynesians might find it disrespectful as you don’t belong there. But if you do get one, make sure you know the history, culture, and traditions. This article should be a great crash course on that for you!

Watch out: You might encounter some locals complaining, but keep in mind, that these people probably don’t like the traditional Polynesian tattoo on foreigners' bodies at all. And there’s nothing you can do with that, so don’t take it personally.

If you’re interested in getting tattooed in the homeland of tattoos, there’s nothing that should stop you. Also, getting the traditional Polynesian tattoo designs is a unique experience itself. Just be sure, you do your research, find the right tattoo artist to do it, learn about the meanings, and use this guide to help you decide on the tattoos. :) 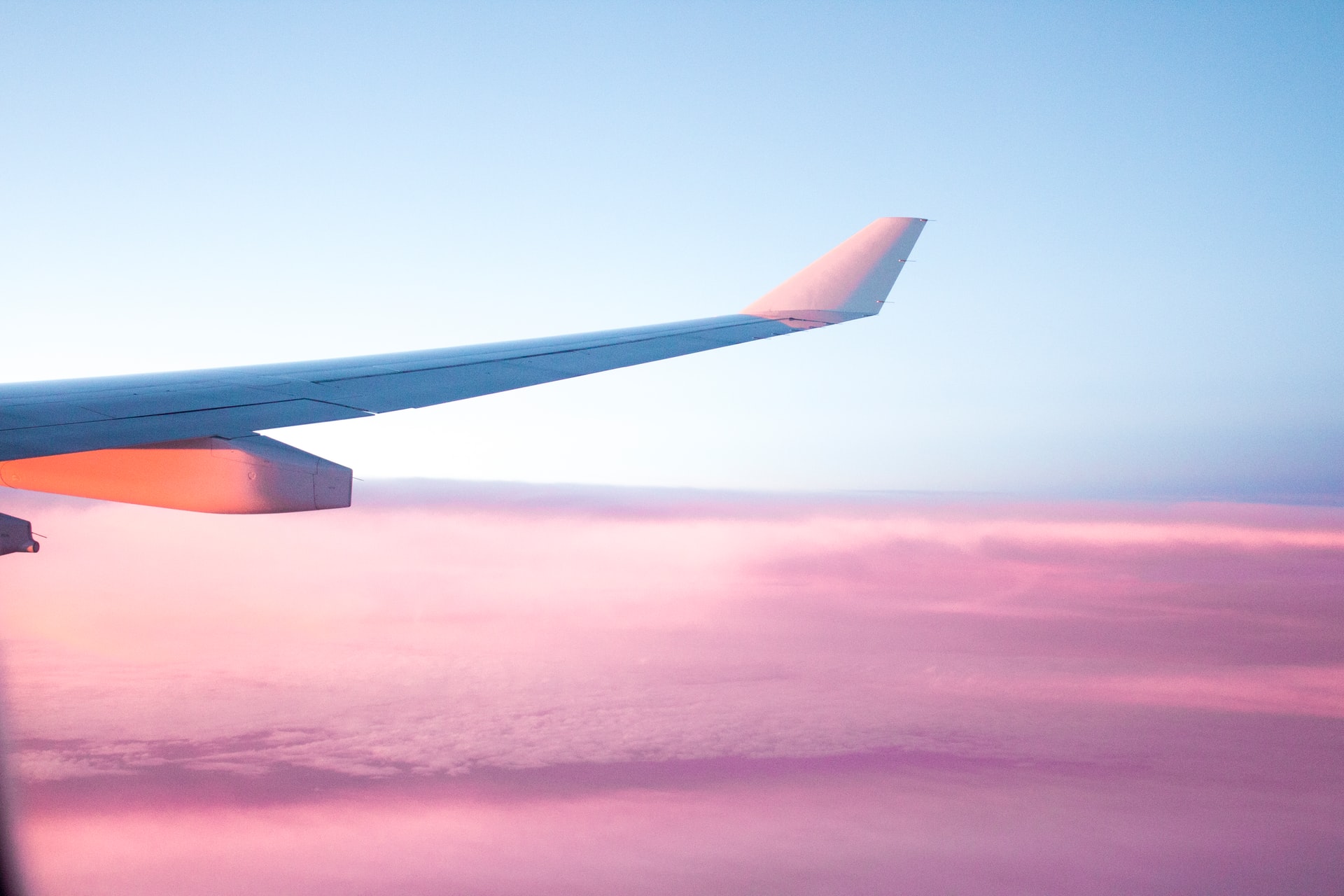 How to get to Bora Bora: Your ultimate up-to-date travel guide (2022) 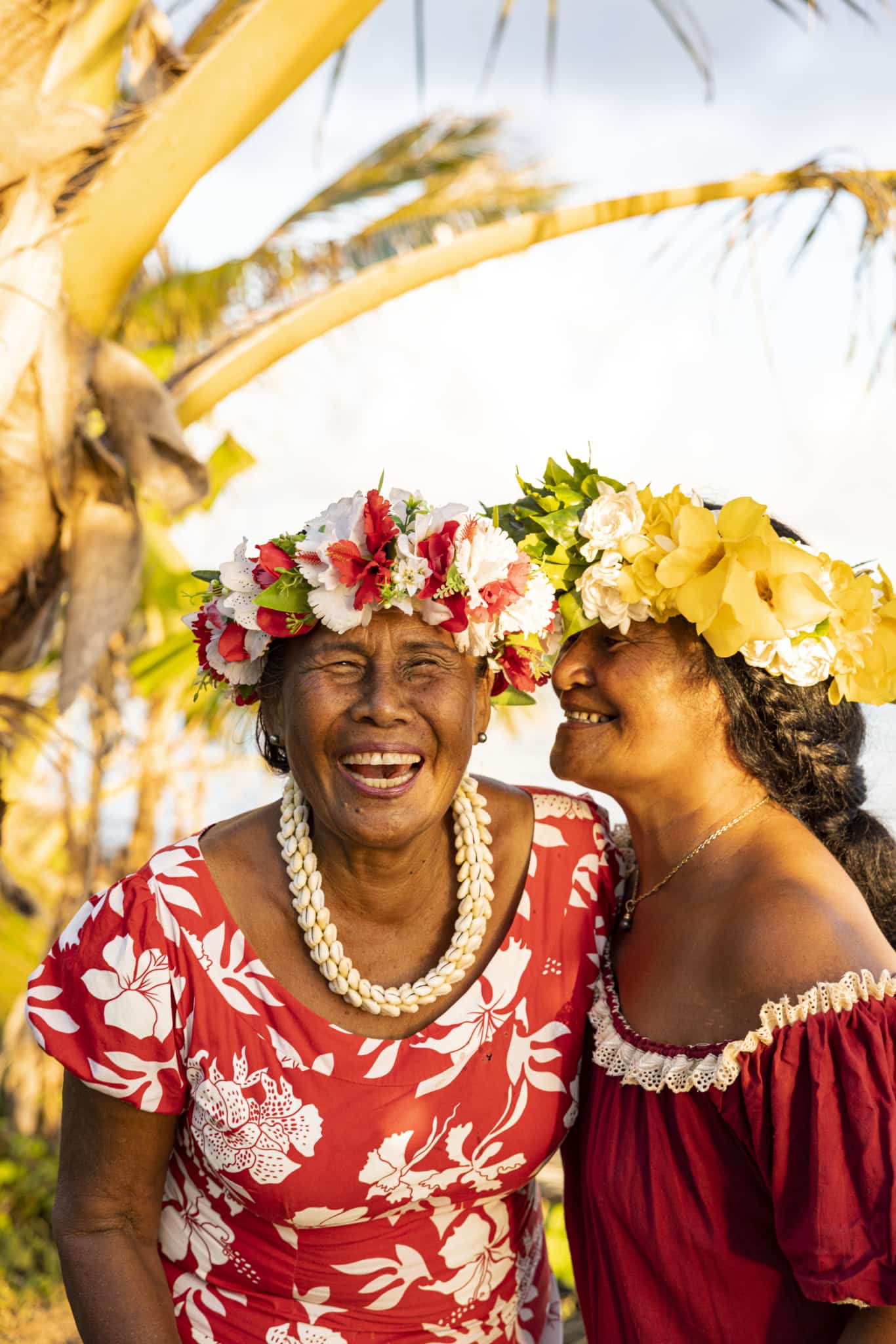 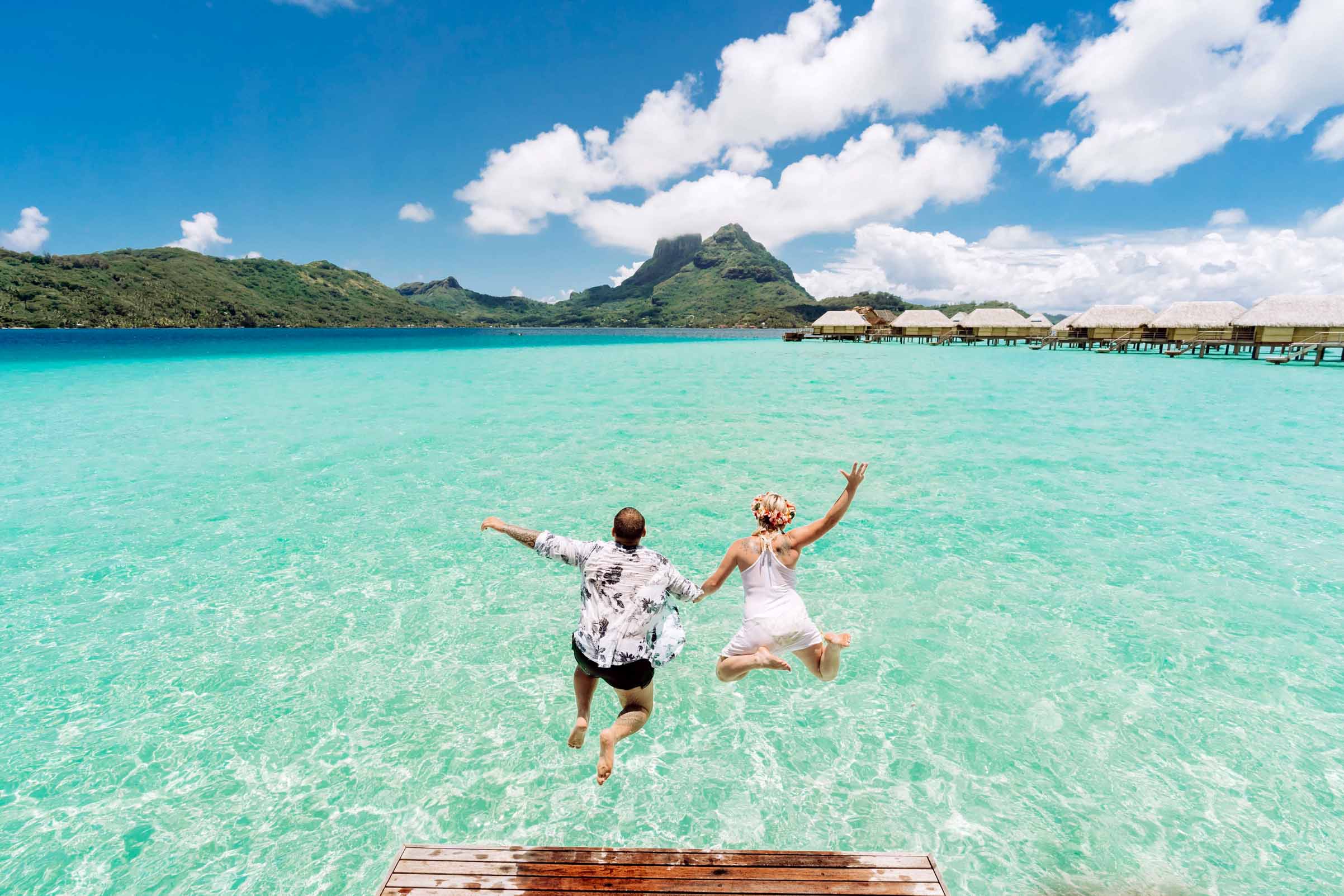